Collect, learn, pass … Founders of the Museum of Folk Arts Laduz in Burgundy, Jacqueline & Raymond Humbert expressed their common passion in many texts. A few sentences from their writings

« I bent down to pick up things that were on the floor and on which we would work with indifference » – Raymond Humbert « Knowledge of the past has meaning only if it allows a genuine knowledge to continue. » – Raymond Humbert « The bird leaves its footprints on the sand of the beach, hare brand hers on snow. He is the same man: involuntary footprints or signs traced to manifest his presence or his thoughts « – Raymond Humbert 1980. « The Work of emotion, the single room is not defined by the technical feat of accomplishment nor the time spent, but with a feeling that emerges, the shock is received, its strangeness, its unexpected . These works disturb the flow classification. They have become rare. The advantage of the unexpected, the beauty of form and circumstances, can give the utility object, the priority image to be a sculpture. The quality of the material reinforces the « – Raymond Humbert 1988 « We need to live with them, to learn, to understand before passing » – Jacqueline Humbert

Raymond Humbert is concerned, gather these items to safeguard the forgotten memory disappearing into indifference. These works take place at home for months where he can study them, observe them to understand them and know the direction before placing the Museum to share the beauty, the message and wealth.

Creator of the Museum of Folk Arts Laduz in Burgundy, Raymond Humbert was above all a passionate and talented painter. The Work of Raymond Humbert, the sturdy design is important and very personal. Drawing inspiration from his garden Laduz or summer on the rocky coast of Brittany Porspoder, he painted on the ground, in large format, a large and quick movement. « … His painting landscapes … a lot of landscapes, painted in his garden Laduz, very large format, on the floor. It has the broad and rapid movement; the bright colors replace the dark early. Raymond is part of the trees, herbs he knows so well … Others he realizes at the seaside, paintings of ebb and flow, breaking waves, digging vast abyss … Jacqueline Humbert 1994. 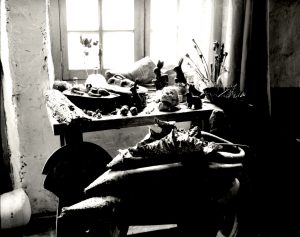 Le Folk Arts Museum Laduz is the fulfillment of one of the passions of Raymond Humbert: collectible works of Popular Art. For Raymond Humbert, the Museum of Folk Arts Laduz is the fulfillment of one of his passions: collecting works of folk art. Since they met at the Fine Arts School of Paris in 1958, Jacqueline and Raymond Humbert accumulate a multitude of objects, true favorites, witnesses of a bygone era. Brest to Metz, Toulouse, Lille … Jacqueline and Raymond Humbert continue to browse France with their 2 CV car: in search of objects that affect them, they go on antique fairs Brest to Metz from Toulouse to Lille. They « make » dumps « senior excavation sites » garage sales. They visit the scrap dealers, junk dealers … They save whole workshops of former craftsmen fell into oblivion. With a concern for aesthetics and logic, Raymond Humbert manufactures windows and classroom tools, objects and documents by profession. Until his death in 1990, it will cease to expand the museum with: the popular toys in 1987, the sculpture in daily life in 1988 and the memory of the campaigns in 1990. A unique collection of 100,000 objects is presented to the public.